Stan was one of the organisers of the first ever Israeli Dance camp. He passed away in November, 2013 (aged 85). This page is a tribute to him and a way of thanking him for his massive contribution to Israeli dance in New Zealand.

Below are our tributes... 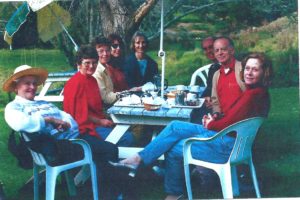 " To Stan from the dancers of Christchurch"

We all want to thank you for your dedication to the folk dancing movement over the years. We especially thank you for playing a crucial part in starting the dance camps, which we now enjoy so much. So we just want to say, " Thank you Stan, we won't for get you, you were a pioneer of the Israeli folk dance movement here in NZ. We will miss seeing you at camps but may you dance on forever" Blessings, Pat Prendergast Waimari Rd Israeli folk dance group

A tribute to Stan from Opawa Dance group, Christchurch. We are very sad that we'll never have the pleasure of dancing with Stan at a Dance Camp again. He was a dear person and so full of enthusiasm for Israeli Dancing. We recognise that all the enjoyment we have in the dancing is due to his energy and foresight in introducing it to New Zealanders. My own special memory of Stan is dancing as his partner, doing Stav Lavan, in Palmerston North. 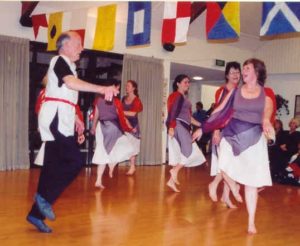 Stan dancing with the Auckland Group

I've known Stan for the past 25 years, and am astounded at how much he has contributed to folk-dancing in NZ. Here are a few personal memories - just snippets - they don't do justice to his vision, energy and his "gifts" to us.

In 1979 Stan, Ruth Ames, Kathleen Osborne, and Barbara Litchfield founded an International Folk Dance Club in Auckland. He "wanted to dance Greek and, of course, Israeli". Rae came up with the name "Ruritanian" and is the club's current president. She spoke at his 5.11.13 funeral.

Late 1988 I started going to the RIFDC monthly socials, and from there joined Ruth's performing group Tzinakis (1989). Ruth invited Stan to teach us a bracket of Bulgarian dances. His "Dobrijanski Pandola" is still popular. 25 years on and we are still dancing together.

That same year 1989 I happened upon Israeli dancing. I wandered into the Torbay Hall following some beautiful music. Stephen Friedlander, Jan and Deborah (the future Mrs Jan Bilton) told me it was Israeli. Maybe Stan, Hillary and Colleen were there that night - if not - I soon met them.

Stephen told me about an Israeli-dance camp at Queen's Birthday with Moshe Telem from Tel Aviv. The Hamilton Israeli Dance group -the hosts - evolved out of Stan's friendship and travels with Raymond Matson.

This camp was special. It was the first national Israeli-dance camp in NZ, the prototype of annual Machol Pacificas to follow, and tutors of international-dance shared top billing with the overseas guests. Sylvia did Polish and Russian. Stan taught some Greek dances, including "Tai Tai". There is a video of Stan in Bulgarian costume at another such camp.

When Folk Dance NZ started up their national camps, Stan taught 'Israeli dances' to the 'international dancers' ["Ben Binyamin" was one]

He was a great support to Machol Pacifica, and attended most camps. He was too busy to dance in the Opening Ceremony of the Commonwealth Games in Auckland 1990. He often performed at Ruth's "Winter Warm-Ups". More recently he'd miss the odd Ma'ayan class with Erica, Pamela and Jenny at Beth Shalom Synagogue- he'd be ballroom dancing, or over on Waiheke Island renovating his bach.

In the 90s I subscribed to the "NZ-Israeli Folk Dancer" periodicals [yellow covers]. Who was this mysterious writer Rick Udiam? Years later I learned it was Stan. Say it out aloud (with a different accent) and you can hear "rikud" the Hebrew word for Dance.

On his many trips to Israeli [with his famous fold-up bicycle] he filmed concerts and festivals. Whenever overseas tutors came to NZ [e.g. Geo Sorin] Stan would record their workshops (Super 8 film from memory). He even filmed Edy Greenblatt in his John St kitchen ["Shiri Le Kinneret" and others]. He collected a big library of classic Israeli dances (videos, cassettes, disks, notations sometimes in Hebrew- hmmph) and happily shared his resources with others.

3.11.13 text from Gabrielle: "Stan was a great friend to NZ dance ..A true pioneer - we owe him a lot... Erica and Pamela both treated him with the respect due a Rangitira of Auckland Israeli dance"

I, too, see him as a chieftain of high status "piercing the sky", and trust he is still dancing on high.

Those of the Wellington Israeli Dance Group who have been around for more than 2 or 3 years fondly remember Stan, the Auckland co-founder of Machol Pacifica. I have my own enjoyable memories of Stan, mostly from my Auckland days when I first met him in 1988, but also occasions with mutual friends since.

Originally an International Folk Dancer, Stan was quickly drawn to the excitement of Israeli Dance and soon mastered enough dances to start teaching in the early to mid-eighties. His classes would blossom, then after a short break or overseas travel to increase his repertoire, they were sparked again usually at a different venue. By the late eighties Stan and Raymond became convinced that a 3 day workshop could successfully be held in Hamilton, taking the risk of bringing a teacher from Israel. So successful it was that they repeated the event the following year and thus kicked off the rest. The organizing involved developing strong connections and long friendships with growing groups in other centres particularly Wellington and our late Marcia Trask and daughter Yvonne who took over producing the NZ Israeli Folk Dancer, started first by Stan. From 1989 to very recently he was nearly always at camp, even when a crook hip impaired his movements.

Stan's attention to detail was meticulous, an example being the notation system he devised for dances to help his pupils learn (before widespread videos and DVDs). And then it was Stan who filmed and prepared the first video at that first camp. His caring nature was evident in his consistent willingness to share knowledge from his vast memory and library of resources to help others. Another part of his soul took great delight in helping plan social evenings at camps, his creativity resulting in some interesting and amusing items.

In the world of dance Stan will be greatly missed by the Wellington group. Val Meyer commented that she thought Stan would "go on forever". Well, we know the wonderful memories will, along with the deep appreciation for all his work. Thanks so much Stan. Michele Dickson, for the Wellington group.